We welcome our trainee Antoine Stilo from Stuttgart in our Paris office for the next 5 months. Antoine graduated in the French-German double cursus of the Universities Paris-Sorbonne/Cologne and is at present terminating a Master of Laws in “Globalization and Law”, with a specialisation in international commerce and investment at the Maastricht University, Netherlands.

Antoine participated recently in the Model European Union Strasbourg 2017 which is a simulation of EU decision-making and politics that annually takes place in Strasbourg. This conference brings together about 200 students and young professionals debating two controversial legislative proposals drafted by the European Commission and simulate EU law-making by acting inter alia as Members of the European Parliament, Members of the Council of the European Union or Lobbyists.

Antoine speaks fluently German, French and English and will by his legal education so far and his cultural focus be an excellent support for our team. 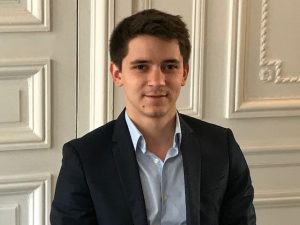 View all posts by Ulrich Zschunke →